ARTISTRY, FLAMBOYANCE & FLAIR were on display on London’s Brick Lane as the Old Truman Brewery played host to a celebration of football shirt culture.

The Art of the Football Shirt, a pop-up exhibition from Jacket Required, delivered a gloriously nostalgic trip through football’s flirtation with graphic design and fashion, whilst looking at the game in it’s social context and place in popular culture.

From the elegant cut and slim stripes of classic 80s and 90s Italian styling to garish efforts from Japan and Mexico, curator Neal Heard explored football’s relationship with music, politics, fashion and design.

In an age of Nike led functional uniformity, where Chelsea’s away strip is just a shade away from Tottenham’s home kit, the collection reminds us of times where football shirts were bespoke creations embracing graphic design and inspiring streetwise fashion labels.

For those attending the two-day exhibit, the items on display transcended sportswear and were more akin to religious artefacts. On entry, visitors were treated to a view of eleven of the game’s most iconic designs.

There was the instantly recognisable rose-red 1966 England World Cup winners shirt. Unsullied by corporate sponsorship, the triumphant top is burned into our collective consciousness even if Bobby and the boys lifted the Jules Rimet Trophy many years before our births.

We wistfully admired the classic West Germany shirt from Italia 1990. A classic from Adidas’ heyday and a shirt so good that even sworn rivals acknowledge it was a bit special.

The brilliant orange of the Dutch 1988 European Championships winners, Denmark’s Mexico ’86 Hummel humdinger, the light blue and white of Argentina and the Brazil 1970 shirt that brought Pele and  joga bonito to the world’s attention in vivid technicolor. All iconic international strips, all rightfully held in the highest of esteem.

Football, the international language of playgrounds, public houses and boardrooms has the incredible ability to prompt middle aged men to openly talk about fashion.

“Is that bloody Oxford United?” they choked.

The most iconic football shirts are instantly recognisable and familiar the world over. To the initiated, an Ajax or Boca Juniors home shirt is easily identifiable a mile away and although often imitated, the all-white of Real Madrid or the Blaugrana of Barça stand for more than just sport.

For the nostalgic amongst us, the functional template designs of today’s sportswear brands wildly miss the point. Who draws pride in a shirt that’s sole purpose is to draw sweat away from the body? The uniform blandness of modern designs leads us to the unwritten rule that no man past voting age should ever wear a football shirt in public other than to watch his team at a major final. Give me Umbro’s Euro 96 grey of Gareth Southgate over Nike’s navy blue of today’s England away strip any day.

The Art of the Football Shirt was an opportunity to celebrate rivalries and tribal colours where the majestic Manchester United “snowflake” sat shoulder-to-shoulder with the silver sartorial elegance of Liverpool’s “Candy” away shirt.

As much as there were glaring omissions (who could ignore the 20th century’s greatest moment of design flair? No not the Coca-Cola bottle. The QPR home shirt?) this was a chance to marvel at our game at its most beautiful. 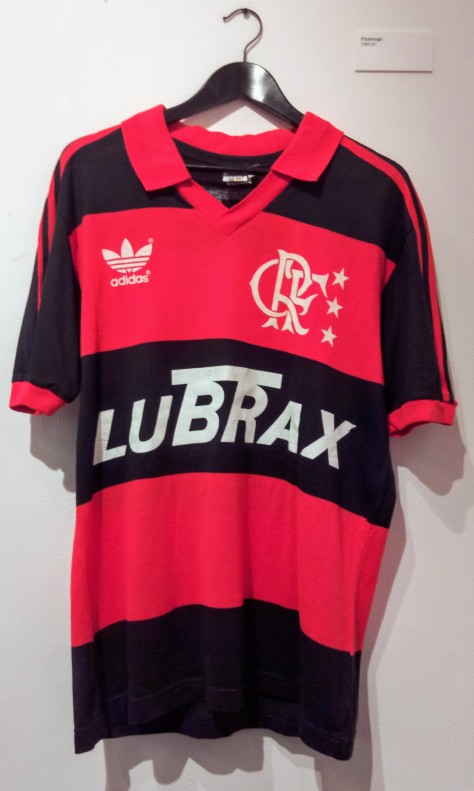 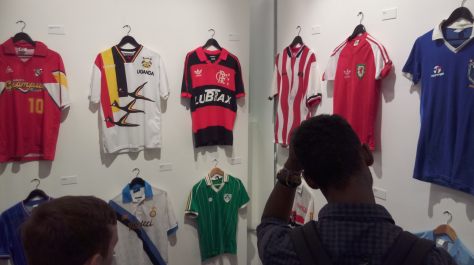 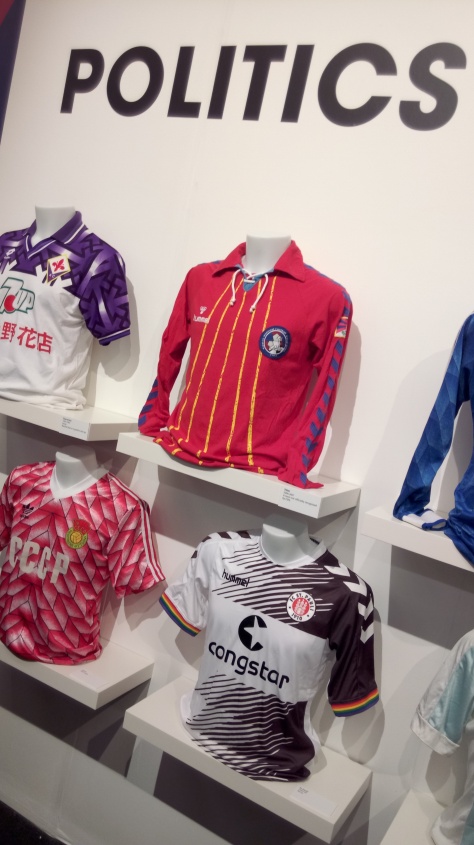 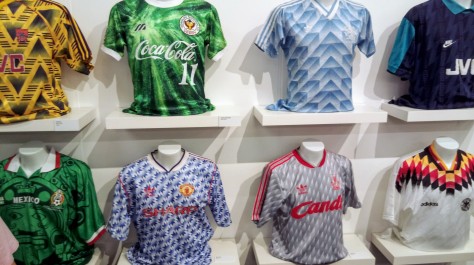 Casting aside the pre-season cynicism that has been in evidence this summer, the return of scout Mel Johnson to QPR is a positive step for the club.

Johnson links up with Ian Holloway for a second time and R’s fans will hope they can enjoy the same success in the transfer market as they did in their last spell together in Shepherds Bush.

Before his departure for Tottenham Hotspur 12 years ago, Johnson helped Rangers identify and sign players including Lee Cook, Gareth Ainsworth, Dan Shittu, Marc Bircham and Lee Camp; all of whom still fondly remembered in W12.

Since then Johnson has worked at Liverpool and West Brom as well as Spurs (where he apparently recommended an 18 year-old left-back by the name of Gareth Bale to the Lillywhites) and has a wider network of contacts for it.

He returns to QPR with a brief to scout the south of England and Europe and told qpr.co.uk he is happy to be back at Loftus Rd:

“I’ve gone away, travelled around the world, and built up so many great contacts in football.”

“My heart has always been at Rangers and I’m just so excited to be back.”

Personally, the spell where Johnson worked under Ian Holloway is up there with the most enjoyable periods of football I’ve seen in 30 years of watching Rangers. It was a time when I felt that the club and fans were truly in-step with one and other, long before the bloated excesses that would characterise the club in later years.

With the exception of that summer under Neil Warnock where Rangers brought Shaun Derry, Clint Hill, Paddy Kenny and Jamie Mackie through the entrance doors on South Africa Road; I can’t think of a time the club has worked so hard and so well in the transfer market as under Johnson and Holloway. Working on a shoe-string budget, QPR set about signing the right characters rather than signing big names or average players just to fill a position.

Johnson joins the club at a time when there has been criticism on social media that the club have not been bold or ambitious enough in the transfer window, but if Johnson’s arrival is a signal of the club being run as a stable and sustainable club in the Rangers tradition of yore then I’m all for it.

A club looking to find young, hungry players the supporters can bang the walls at Loftus Road for is a far better prospect than one where agents and mercenaries run the show.

Welcome back Mel, finding a new Danny Shittu and the next Stan Bowles would be a nice start!

After Zinedine Zidane, the original Ronaldo, Bobby Charlton and Ray Wilkins, we’ve become used to brilliantly bald outfield players, yet up until recently, the sight of follicly-challenged goalkeepers has been a relative rarity.

Following many years in the sporting wilderness, slap-headed stoppers are becoming increasingly common in the game, yet Caballero 34, is still one of a comparatively select band of bald goalkeepers.

END_OF_DOCUMENT_TOKEN_TO_BE_REPLACED

It’s the stuff of boyhood dreams.

Whilst mere mortals pretend to be their idols on PlayStation or Xbox, Norwegian wonder-kid Martin Ødegaard has joined them for real.

At sixteen years of age and already a full international, the teenage prodigy had his choice of Europe’s top clubs before agreeing a £40,000 per week deal to join Ronaldo, Rodriguez, Ramos, Bale and Benzema at European champions Real Madrid.

END_OF_DOCUMENT_TOKEN_TO_BE_REPLACED

From Wembley, to Old Trafford, to the Emirates, every weekend, tens of thousands of fans choose to stand in front of their seats in English football’s all-seater stadiums; prompting calls for the introduction of “safe-standing” sections in Premier League and Championship stadia.

In August, the Liberal Democrats made a pledge that they would allow clubs to introduce standing sections to English stadia in their 2015 General Election manifesto. Rather than a return to the vast expanses of terracing seen in the 1980s, the party proposes the adoption of the “rail seating” system already in operation in top European leagues such as Germany’s Bundesliga.

END_OF_DOCUMENT_TOKEN_TO_BE_REPLACED

As the final whistle blew at Natal’s Estadio das Dunas, Uruaguay striker Luis Suárez stood alone in the centre circle. As his team-mates celebrated the 1-0 victory which had ensured their progress to the last 16 of the World Cup Finals at the expense of Italy, the Liverpool striker suspected his own tournament would end in customary controversy. END_OF_DOCUMENT_TOKEN_TO_BE_REPLACED