As Brian Deane scored the Premier League’s first goal, our football viewing habits were more likely to include Atalanta than Atletico Madrid.

Flick through the pages of a 1990s football magazine like 90 Minutes or Total Football and you’ll find its pages devoted to Serie A with mere footnotes to La Liga.

In the early 1990s, Italy was the destination of choice for the World’s top footballers. There was simply no greater league in world football than Serie A.

After a successful World Cup Italia ’90, Paul Gascoigne, David Platt and Des Walker moved to Italy and Channel 4 paid just £1.5m to broadcast Italian football; capitalising on the fact that Sky had ended free to air coverage of England’s top-flight.

Each week, James Richardson with a gelato and espresso close at hand, perched outside a café in a piazza for a good-humoured run through of the week’s comment, analysis and scurrilous rumours from the pages of Gazetta dello Sport and Corriere dello Sport.

Des Walker told us how well he was adapting to all the pasta, David Platt showed us around his latest mansion in Bari, Turin or Genoa. And Gazza? Well Gazza covered himself in chocolate sauce and larked about with hair extensions.

Gazza-mania may have prompted the initial investment but we soon found there was more to keep us entertained than updates on the England midfielder’s injury rehabilitation.

Reminiscences of Football Italia can be summed up in one word: Golazo!

Looking to inject excitement and atmosphere into the football we initially feared may be a host of goalless draws and Catenaccio, Channel 4’s producers took a clip of Brazilian born commentator and former Milan, Napoli and Juve star José Altafini screaming the Portuguese word for “beautiful goal” – GOLAÇO! – and made it the centre piece of the opening titles.

For years we misheard Altafini’s cry as “Go Lazio!” in support of Mr Gascoigne.

Sunday afternoons were devoted to a live match and away from the English playing contingent, we were introduced to Foggia, Ancona, Regianna, Lecce and Padova.

We purred over the talents of the “divine ponytail” Roberto Baggio whilst Fiorentina’s Gabriel “Batigol” Batistuta prowled penalty areas with his hands on his hips and “Nintendo” daubed on his chest. The axe-wielding USA international defender Alexei Lalas brought us “rock n roll football” long before Jurgen Klopp and Southampton star Ali Dia’s cousin George Weah wasn’t doing too badly at Milan either.

Our growing love and thirst for knowledge of all things Calçio made us feel a little more cosmopolitan. In our heads we dropped the “AC” suffix and began referring to the dominant 90’s side as plain old “Milan,” rejoicing in the fact the club had retained the English name for their city. Even if they did pronounce it “Meee-lan.”

The colours and stadia of Italian football gave young English boys a whole new area of study away from their League Ladders and Rothmans’ yearbooks.

Inter Milan, AKA plain old Internazionale, we’re resplendent in black and blue whilst, San Siro housemates Milan wore red and black to underline their rivalry. In Turin, city neighbours Toronto and Juventus shared the Stadio delle Alpi whilst in the capital, light-blue Lazio and “imperial purple” Roma kept an uneasy household at the Stadio Olimpico.

This was a time when the Premier League was still finding its feet and English clubs were just about getting used to European competition again after the Heysel Stadium disaster and the ban that followed. These were the opening days of the newly branded Champions League which gave even more power and cash to the arm of Europe’s top leagues. In fact this was an era when believe it or not, playing for Celtic or Glasgow Rangers was a far bigger draw than Stoke City, Bournemouth or Middlesbrough.

As Sky’s millions filled the coffers of Premier League clubs, English clubs looked to Serie A as a recruiting ground for talent to serve entertainment for punters sat comfortably in the stands or at home on the sofa. 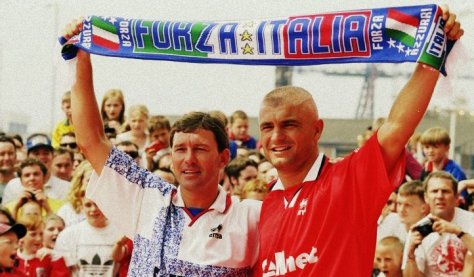 Serie A sides made the Champions League final 8 times in the 1990s, winning the big-eared cup 3 times. Since the turn of the century, Milan (twice) and Inter have won 3 competitions as the pendulum has swung towards Real Madrid and Barcelona dominating engraving space on the trophy.

With a whole new ball game in England, Italian football was sinking in a mire of corruption and financial mismanagement as clubs with profiles as high as Fiorentina and Parma struggled financially and Juventus saw demotion to Serie B.

Our love affair with cosmopolitan Calçio was beginning to diminish as the media’s attention moved to Spain and to the exotic clubs we embraced on holiday to the Costa Brava and Balearics.

Instant news and analysis via 24 hour news channels coupled with the advent of the internet, saw print media begin to die. Fans voted with their wallets for Sky Sports and coughed up for satellite subscriptions and round the clock coverage of the Premier League and La Liga.

Slowly, developments at Lazio, Fiorentina and Sampdoria slipped away from our general consciousness. Before long, ever more Barcelona and Real Madrid shirts appeared on playgrounds and on our high streets as coverage of El Classico made it a worldwide sporting event.

As Gazetta’s ratings fell, Channel 4 gave up on Football Italia. Coverage switched to Eurosport, then Bravo, before ignominy of ignominies, Five.

The popularity of Calçio in the UK coincided with a time when there was a drought of football on television. James Richardson and Channel 4 gave us something a little bit fun, a little bit different and something free of the “sick as a parrot” cliches of the time.

Although it never went away, Serie A football was never as popular as in those heady days of Channel 4 coverage in the 1990s.