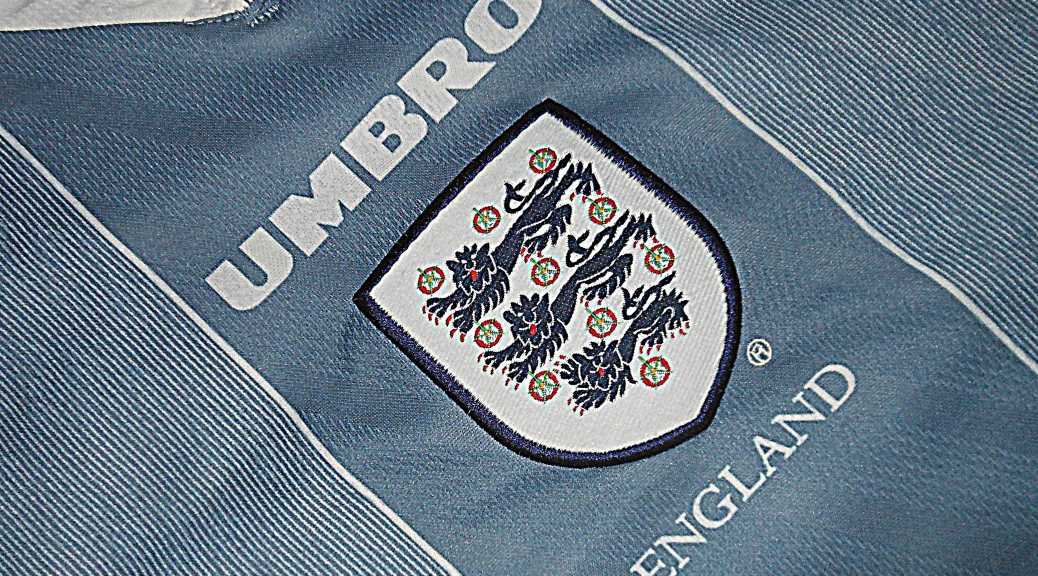 England made a radical departure from their traditional red away shirts for Euro 96 with a grey kit that still divides opinion like Marmite.

Officially marketed as “indigo blue,” the Umbro shirts were created with supporters in mind as it was felt that the design would go well with jeans.

The grey shirts may have combined well with denim, but sadly not so well with football shorts and socks and became forever associated with missed penalties and dashed dreams.

England’s grey kit was worn 3 times in total. Once for a friendly against Bulgaria at Wembley and in a later World Cup qualifier versus Georgia in Tbilisi. Yet few remember those shirts for anything other than that Euro ’96 semi-final and penalty shoot-out against Germany.

In the summer of 1996, like a prodigal son, football came home for a few weeks, treated the place like a hotel and then took up a better offer in Germany.

Memories of England in grey centre on Gareth Southgate and the strains of Walkaway by Cast providing the BBC’s exit music to an evening of what might have been.

Up until that point, Wembley had bounced to Baddiel, Skinner and the Lightning Seeds’ Three Lions. Fans waved the flag of St George in joyous expectation that Terry Venables and his boys would end the thirty years of hurt since Bobby Moore lifted the Jules Rimet Trophy under the famous Twin Towers. 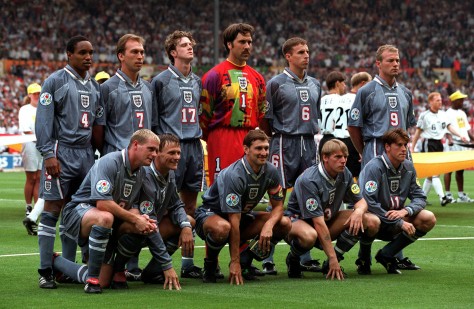 Venables’ side were dynamic, fluid and had a strong spine with Seaman, Adams, Pearce, Gascoigne, Ince, Platt, Shearer and Sheringham providing experience and guile throughout an attacking side. Excitement mounted that the Three Lions could finally reward their public having dispatched of Scotland, Holland and Spain on the way to the Semis.

Alan Shearer settled the nerves of millions giving England the perfect start with a stooping header in the 3rd minute before Stefan Kuntz equalised 13 minutes later.

England had chances to reach the final as Darren Anderton hit the post before an outstretched Paul Gascoigne came agonisingly close to turning a loose ball into the net.

The match went to penalties and English memories turned to Turin.

Before the Pizza Hut commercials, Gareth Southgate had his penalty kick saved allowing Andy Möller to strut away hands on hips in perhaps the greatest display of sporting arrogance since the FA refused to contest FIFA tournaments in the 1930s.

Venables and England were out on penalties. Kuntz indeed.

As England away shirts go, this break from tradition was not as popular a design as the Italia ’90 light blue 3rd shirt with all it’s New Order credibility. Whilst not as smart as recent efforts in navy, the true crime against footballing fashion was the garish David Seaman “tube of Refreshers” strip.

Designed as much for the pub as the pitch, England looked like medieval knights in those kits with thick grey and white pinstripes.

Had Southgate scored, this shirt would receive the retro credit it deserves, but the association with a miserable night at Wembley lumps this kit in with the grey Manchester United shirts thrown away at half-time.

Grey was never the new black but after another generation of disappointment for England, has the time come to reassess our feelings towards the indigo blue?

One thought on “Classic Kits: Grey England at Euro ’96”