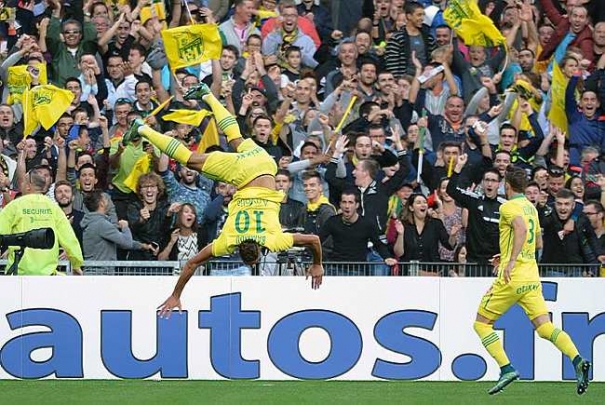 Fate decrees that when a player lines up against his old club, he will inevitably score.

So when 23 year-old Nantes striker Yacine Bammou led the line against PSG last weekend, the Moroccan international was a nailed on certainty for an anytime goalscorer bet.

Just two years ago, football loving Bammou was selling replica shirts in the Paris Saint Germain club shop (Ok, it’s more of a boutique than a plain old club shop). Last weekend, he faced his former employers at the Stade de la Beaujoire, a professional footballer in his own right.

The rags-to-riches story was complete when Parisian born Bammou’s powerful header beat German keeper Kevin Trapp to give the hosts an unlikely 11th minute lead over the French champions.

However, PSG would prove their worth as the Qatari backed giants came back to crush Les Canaris 4-1, with second half goals from Zlatan Ibrahimovic, Edinson Cavani, Angel di Maria and Serge Aurier.

Bammou’s goal is the latest chapter in the heart-warming  story of a man who may have been forgiven for thinking his chance of a career in football had passed him by.

“I got to know the world of work. You get up early every morning and you work hard, as you do in football,” he said.

“I would see (former PSG sporting director) Leonardo every morning in the club shop. Once he came out of the lift and I said to him ‘Excuse me, Leonardo, I play football when I’m not at work, do you think I could come and train with PSG?’ He laughed! He said ‘Really, you’re a footballer?’ I said ‘Yes I am, I can show you my skills if you want,’ he said ‘No, no, it’s ok little fella’.”

Scouts alerted La Maison Jaune to Bammou’s talents whilst he was playing amateur football for FC Evry in the French fifth division.

Nantes possess a youth system which has produced players such as Marcel Desailly, Didier Deschamps, Mickaël Landreau, Claude Makelele, Christian Karembeu and Jeremy Toulalan. After time in the reserves and a loan spell with lower league club Luçon; Bammou’s Ligue 1 chance finally came when Les Jaunes et Verts were forced to look within their own ranks due to a transfer embargo. He was to make an immediate impact, scoring a match-winning goal just 32 seconds into his full debut against RC Lens in August 2014.

For anyone who has ever dreamed of mis-placing a five-yard pass in front of a packed stadium, Yacine Bammou’s rise to the top is a heartening reminder of the romance that attracted us to the game in the first place.

Yacine Bammou, we salute you!