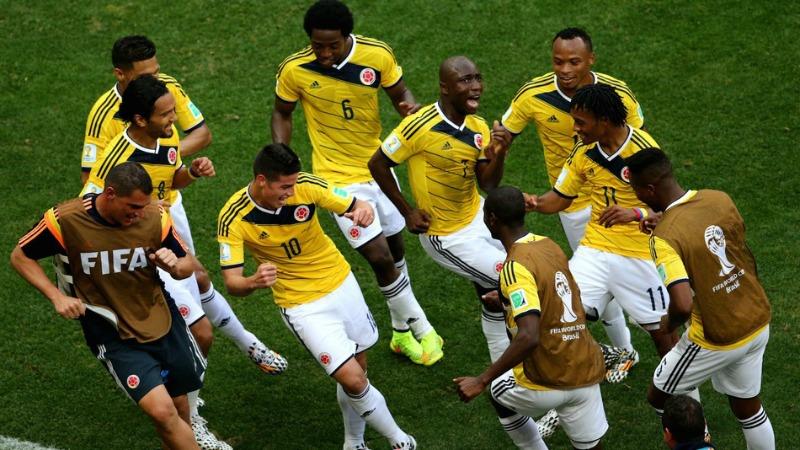 Colombia face host nation Brazil in the Quarter Finals of the World Cup tonight, in possibly the biggest game of their footballing history; the game taking place 20 years and 2 days after defender Andrés Escobar was shot dead having scored the own-goal which eliminated his team from the 1994 World Cup in the USA.

For José Pékerman’s daring attack-minded Colombia side, competing in their first World Cup since 1998; pre-tournament expectations have been lowered following an injury to talismanic striker Radamel Falcao of Monaco which ruled him out of the competition.

Fortunately, his team-mate for club and country, 22 year-old playmaker James Rodríguez, has stepped into the limelight scoring five goals in four games. Rodriguez is just one of a generation of young talented Colombians including Fiorentina’s Juan Cuadrado and Jackson Martínez of Porto who have grown up since 1994. A team playing without fear, Colombia have danced their way to the Quarter Finals, playing football with smile on their face. they know that even before a ball is kicked in Fortaleza, their progress marks Colombia’s best ever showing at a World Cup.

Twenty years ago Colombia entered the World Cup high in confidence having sealed qualification for USA ’94 with a 5-0 victory over South American rivals Argentina in Buenos Aires. Los Cafeteros played with passion and personality and were bristling with talented players including Carlos Valderama, Faustino Asprilla, Freddy Rincón and Escobar himself. So impressive was their form, the great Pelé tipped them to win the World Cup.

Football was an escape for Colombians. Twentieth century history had been punctuated by conflict, resulting in a society which had allowed drug cartels to operate with relative impunity. The United States’ government had woken up to the social ills cocaine had wrought upon its cities and declared war on the Colombian traffickers who had become billionaire businessmen exporting narcotics from the country. Fearing extradition to the US, drug barons including Medellín Cartel kingpin, Pablo Escobar (no blood relation to namesake Andrés) looked for ways to legitimise their business and launder billions of dollars of drug money. Politics was one answer, Robin Hood style social philanthropy another, yet football’s halo-effect provided the most glamorous outlet. Money laundering through football became known as “Narco-Soccer,” and the high-stakes sporting arms race provided top class facilities and coaching; acting as a catalyst for the national team’s improvement.

Whilst Pablo Escobar’s support for Andrés’ club side, Atlético Nacional, culminated in their 1989 Copa Libertadores (South America’s Champions League equivalent) victory; off the field, Colombia had descended into chaos. The war between the various cartels had escalated resulting in the world’s highest murder rate. Bomb attacks, intimidation of judges, assassinations of government ministers, the deaths of hundreds of police and thousands of civilians prompted the authorities into action. A crackdown began, and in 1993, Pablo Escobar was killed in a firefight with police in a Medellín suburb.

Aware of the world’s view of their homeland, the 1994 Colombian team aimed to make their country proud and show their nation in a positive light. Colombia were playing a vital role in their country’s image, whilst they played, people thought of Valderama, Asprilla, Rincon, Higuita rather than drug cartels.

Having entered the tournament without goalkeeper René Higuita (who was unfit having spent time in prison for his role in a kidnapping), Colombia surprisingly lost their opening game to Romania after a Gheorghe Hagi wonder goal. Gamblers lost big money, death threats followed. To illustrate the seriousness, TV screens in the players’ rooms were manipulated to show messages calling for changes in the starting line-up and spelling out what would happen if improvements were not made. The psychological effect was marked. In their second match against unfancied hosts, USA, events took a tragic turn.

Andrés Escobar, whilst attempting to block a cross, inadvertently diverted the ball past his wrong-footed goalkeeper.  Colombia went on to lose the match 2-1 in a massive upset. Whilst pre-tournament expectations may have been over-hyped, the opening results spelled World Cup elimination. Failure to reach the knock-out stages of the competition was seen as a disaster at home. Coach Pacho Maturana and several players from the 1994 squad decided enough was enough and quit international football. Victory in the 2001 Copa América aside, Colombia have taken a long time to recover since 1994.

Upon returning home Andrés Escobar, decided to take up an offer from friends of a night out to raise his spirits; a decision that would cost him his life. On July 2nd 1994, following a nightclub disagreement, he was shot six times in the car park of a Medellín discotheque. Without Pablo Escobar around, a power vacuum had been created; honour amongst thieves was a  thing of the past, a fight would not be settled with fists. Escobar is often described as the man murdered for a mistake in a football game, yet it was Colombia’s broken society which ultimately killed him.

In a poignant self-penned epitaph,  Andrés Escobar wrote in a post-World Cup article that “life doesn’t end here, we need to go on.”

Despite the violence and thousands of deaths, it took the death of Escobar to open the eyes of the world  to Colombia’s issues and the country has since made significant steps to combat the cartels.

Opponents Brazil, who won the World Cup at USA 94, have made steady, if unconvincing progress to this stage, needing penalties to overcome Chile in the Round of 16. The status of host nation has brought with it the added pressure of public expectation.  Colombia will hope to go one better than Chile.

In a World Cup with goals galore, South American sides have enjoyed the tournament in Brazil and have captured the imagination of a worldwide audience. José Pékerman’s side have already earned plaudits for their dynamic style of play and achievements so far, but know that they have a chance to gain true recognition at football’s top-table with victory over Brazil and further tournament progress.

Andrés Escobar’s believed football could be a catalyst for social change and wished for Colombia to be seen in a positive light. 20 years on, a new generation, unburdened by the same pressure as his team, stand on the threshold of achieving that aim.

Update: Although Colombia may have lost 2-1 to Brazil on the evening, their progress to the Quarter Finals represented their best ever World Cup showing and they returned home to hero’s welcome. The memories of Rodriguez, Cuadrado and a squad including the tournament’s oldest ever player, means their heroics will live long in the memory of fans the world over.

4 thoughts on “Colombia: An altered image 20 years on from Escobar”